The axe is a tool as useful for felling trees as men. For this reason it is often impossible to tell between tools or weapons. Sometimes the same item may have been used for both purposes. For fighting men of warrior status their axe would probably have characteristics that made it a useful weapon. An axe is not always a weapon.

For  reasons we will never know many more axes are found buried in Norwegian graves of the Viking Period. However, burial customs do not relate to everyday life and it is difficult to say that the axe was a favoured weapon of any group except in the case of the English king's household troops and the Roman emperor's bodyguard. 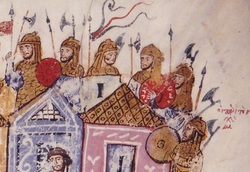 Skylitzes manuscript, from 12th century Sicily, showing Varangian guard in Constantinople. They are armed with axes. One cannot see how long the shafts are supposed to be. At this date the weapon had come to be known as a Dane Axe. Not before. 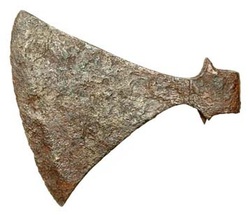 Late Viking period axehead from London.
Jan Pedersen includes an attempted classification of axe heads in his work 'Det Norskevikingesverd' . He takes great pains to emphasise the typology is incomplete and indefinite because axe-heads vary so much and do not always  follow a chronological evolution.

In general, however, axe-heads as weapons change to have longer edges and thinner heads in the later Viking Period. 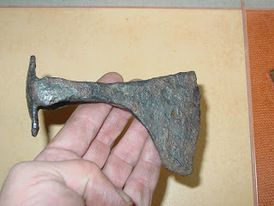 There ar emany of this form found in Gotland, some at Birka and some  in Norway.

Pedersen  describes them as tools and some have been found in women's graves. Anthropological studies from later times indicate this type  of  axe is typical  of a handy tool, often used by women.

This type of axe descends from iron-age types and is a typical tool for felling and splitting.

These are generally from the Early Viking Period. 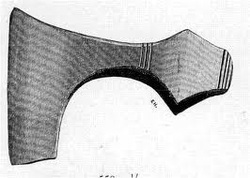 These axes are of very solid construction, with a broad 'eye'. The cutting edge is extended downward in the characteristic hanging 'beard'. Just looking at these in a museum makes one shudder as you realise no shield or even armour wil stop one of these if it is swung with stength. These seem to be a purposeful  adaptation of tools to the function of a weapon.


Later variants have a reduced 'beard'. These types are found from mid  to late Viking Period.. 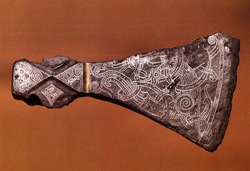 Very æsthetically pleasing group. The cutting edge often curves toward th ehandle in its lower edge and the top edge of  the axe often curves upward.

The cutting edge is not very long but the eye often solidly made.

The famous Mammen axe is of this type. Its ornamentation suggests thi sis definitely a weapon, not a tool. 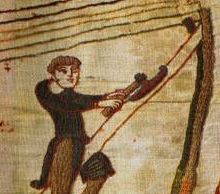 Finishing planks with a T-axe.
These axes are found as either specialist tools for working planks or as weapons in eastern areas, rarely in the west.
The name associated with them, tapor or tabor is indicative they originated in areas in contact with Arabic speakers.

Some have inlay, again indicating they could be weapons. 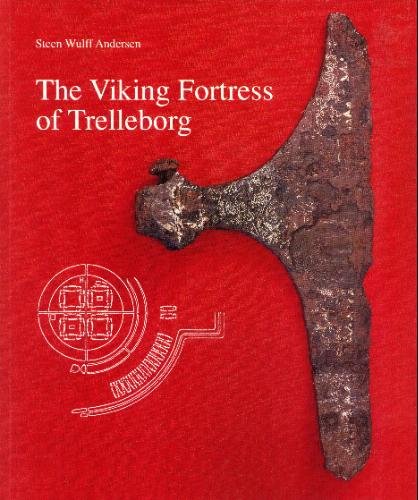 The famous axe from Trelleborg. An expensive weapon. 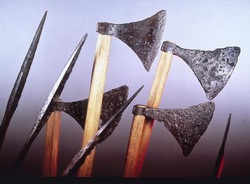 This weapon differs from other axes  due to the length of its shaft. The T-shaped war axes may have had similarly long shafts.

These axe-heads are very thinly forged to make them light and they have an extended,  cutting edge with pronounced  tips.

These weapons appear in the late tenth century and were thus not used by warriors through most of the Viking Period. They seem to have been a weapon of  choice of elite troops. The English king's household troops, Arab rulers, bodyguards and the 'Axe-Bearing Guard' of the Roman Emperor.
In the Bayeux Tapestry he weapon-axes with long shafts are deliberately shown as different from the tools. As the shipwrights fell trees for the fleet they areshown with narrow-bladed axes which would have a powerful head to cut into timber. The noblemen and warriors shown with fighting axes clearly have an axe head with a longer, more semi-circular edge.

The tool at left and the noble weapon, centre and right.

How were Long-handled axes used ? 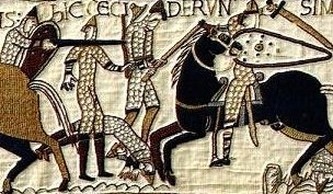 Axe used in downward swing. Another man's axe-shaft is cut by a sword.
We have direct evidence from the Bayeaux Tapestry that these long axes were used with over-arm downward swings. Maybe preferably from the left against the opponents open side.
Probably using all the wielder's strength.
The shaft was not too thick to be cut through by a sword-blow.


Long-hafted axes were prestige weapons. They are found buried in the richest male graves of c.1000AD in Denmark. No peasant or common fighter would have one.

Long handled axes are popular in Viking battle reenactment but not generally used in a realistic manner. There may be good reasons for this. As with spears, using them as they were originally used is very dangerous. However, the way 'Dane -axes are used in reeactment bears no relation to how they were used in history. The long shaft has become a way of compensating for the weapon's otherwise limited effect when used in a safe manner.

There is a tendency for 'Dane Axe' (they were never called this in the Viking Age) to develop extreme length, very heavy shafts, and techniques for wielding them which are anachronistic and ...dangerous. 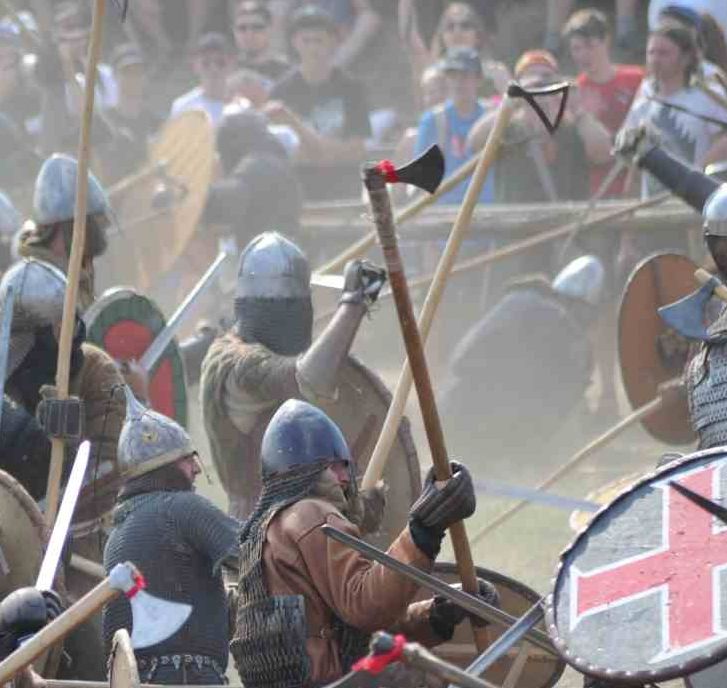 Long shaft, small head - a reenactment axe. NOT authentic.
Watch this video clip from mueum personnel who should know better.
In his defence, the video was made before the final conservation work was complete.
Firstly, he admits that these axes are Irish weapons. They are not 'Viking'.
It is well attested that axes became the weapon of choice for Irish warriors in the medieval era.
Second, he makes suggestions about the length of the haft without any evidence from the find.
This just goes to show how far reenactment myths can penetrate 'common knowledge' .