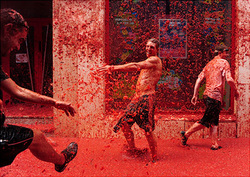 It is easy to jumble these terms together and to imagine simple relations between them that do not, in fact, exist. There is no inherent need nor desire for warriors to train for warfare. Games and sports are not the same thing at all and martial arts may have little to do with the 'martial' activities they are supposedly modelled on. It is readily assumed to the contrary that martial arts are a form of preparation for war and constitute some kind of training for it. Sports and games are put a long way away from martial activities usually and considered peacetime pursuits. Training is preparation and usually preparation for some future test such as competition or warfare. 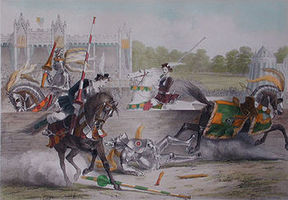 Victorian noblemen reenacting thier ancestors' pastimes.
Re-enactment fighting can be said to have been born at the first mass-tourism event served by the railway, the Eglington Tournament of 1839. At this event the participants, who had done some training in the previous year and sought to recreate the style and atmosphere of a medieval tourney. As with many reenactment events in succeeding years it was a near catastrophe due to torrential rain but still drew large crowds.

With or without a crowd – and some consider reenactment fighting only to be a public display reenactment fighting - whichever period is to be re-created, it involves some attention to the process of how the fighting was done and seeks to set it in context. Whether this is by various degrees of 'role playing' or using ancient or original language is not so important as the fact that historical precendents are acknowledged and used as references. 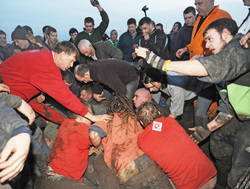 Struggle for the 'Haxey Hood' : a surviving form of medieval football.
Games, on the other hand, have nothing much to do with history. They exist just to provide diversion and amusement, they are not serious. There are games with complex equipment and games as simple as 'tick' which just require a few bodies to play them. Games have no external references and many times the rules are indefinite or flexible and the winner is indeterminate or immaterial.
It does not follow, however, that games are not useful, and have no relation to serious pursuits in everyday life.

At the most basic level physical fitness is maintained and many games mimic real-life to the extent that participation in them is practice for when individuals get to do the real thing. 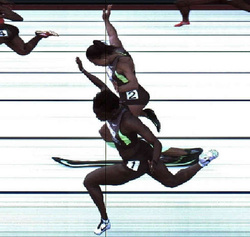 Things get really serious when we get onto sport. Sport has rules and you had better follow them or the rules-police will throw you out! Sports are games developed to a logical and competetive extreme. Everyone participating knows the rules and the aims. The winners receive serious rewards too. If it is not cash it is kudos. The key aspect of sport is that time and measurement come into play. Without a stopwatch, counter or a measuring line sport is impossible. The modern Olympic Games are no longer games, they are sports. 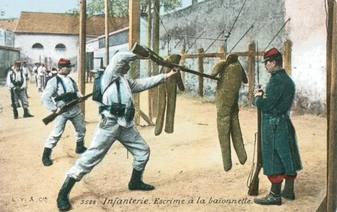 French infantry in bayonet practice 1915
So now we come to training. Training is usually thought of as preparation. It has an end in achieving good performance in a specific discipline or activity. In the case of soldiers training it is to achieve adequate performance in warfare and allow an army to use a tactical system to effect. Training can be to develop the body, for physical fitness and we can also then go into the area of mental and even metaphysical training.

This is where training per se becomes problematic and has left the realms of tangible reality. 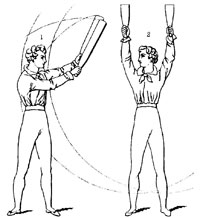 Exercising is another term almost, but not quite synonymous with training. Exercising has less of a developmental ring to it and can be set alongside practice in the sense that it is practical repetition of tasks which is thought to imbue efficiency and understanding of the task in hand. However, many times one can see that training is percieved as a higher thing with a greater sense of achievement implicit.

Exercising and practice have been superceeded by training but I would argue remain just as valid. 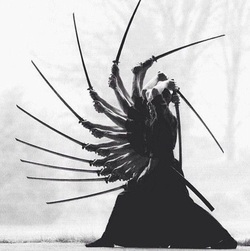 The field of martial arts is a complex one. Are martial arts the training for war ? Are martial arts training derived from war ? Are martial arts intended to give the practitioner skill in combat  or mental preparation for the experience of it? One thing is certain, martial arts prosper and evolve in times of peace, not war. All nations have some form of martial exercising whether or not it could be said to be an art. The bow, the sword, the spear and many other weapons, unarmed combat and horsemanship have been practised with by the martial classes in all nations at all times. But there is a great deal of difference as to the extent of the practice and when we start to discuss ethnic groups without developed civilization the concept breaks down. Martial arts imply instructors and that there is a best way to do things with particular instruments of war. Martial arts identify with training and development of skill to higher levels but they do not necessarily allow for evolution even if it can be seen to occur. In many ways it is the Japanese martial arts which set the tone for the modern scene. A strong spiritual and semi-mystical backdrop had already been created in Japan before they were disseminated after the second world war to an eager western world. Unfortunately the context and history of the practices was often disregarded and the knowledge approach stood in for inscrutable eastern wisdom. This has continued with the trends in medieval martial arts emphasising technical and historical knowledge rather than identification with racial,national,spiritual or social ideals. 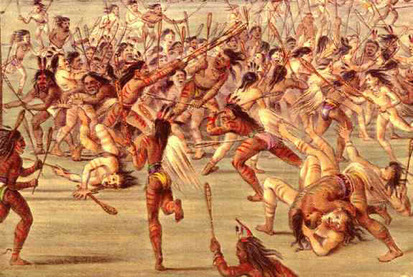 Tribal fighters do not train and do not practice martial arts. The circumstances in which they live and the conditions of their upbringing render their bodies fit and agile even if they are not as well nourished or as heavy as modern western individuals. 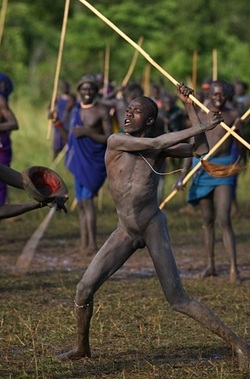 The way tribal or ethnic warriors learn to fight is by games and dance as they grow and by hunting. It is practice and exercise which is rewarded by results rather than aiming at some theoretical best method or spiritual enlightenment which develops their skill. Competition is usually limited to participation rather than aiming to be a champion or win prizes. Indeed, in some contexts anthropologists have observed it is impolite for the winner of a competition to even admit he won and the feats of individuals are lost amongst general nostalgic enjoyment of the event as a whole. 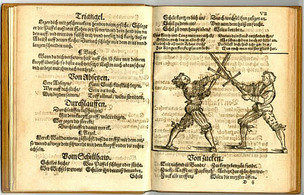 The rise of the 'instructor' and printed manuals... Lebkommer's manual from 1558.
In post-feudal or post-caste societies where mass populations with developed middle-classes exist warfare loses its exclusivity again. Such societies, despite generally agreed Laws of War inflict violence on each others civilians and property to a massive extent and thus require mass armies to wage war. The skills of a single knight mean nothing against a column of pikemen and the pike itself requires a basic level of skill to use. However, the pikeman now can fancy himself as a warrior just as much as the knight and can wear a sword even if it is only to chop his firewood with. The wearer of a sword is also tempted to learn how to use it and will take instruction for the purpose from one of the many experienced warriors touting their services. Here is where the commercial martial arts rear their heads. The skill to use a sword or dagger in a dark street is somewhat removed from intentions to triumph on a battlefield however. 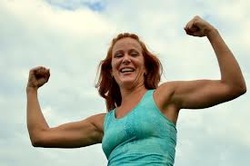 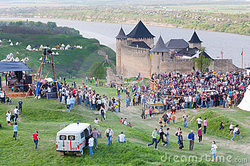 Mock battle at Khotyn fortress, Ukraine
Industrial and post-modern society have produced reenactment fighting, though. From the Eglington tournament down to the Liverpool Pageant of 1907,  where we have the earliest film record of re-enactment fighting, down through countless pageants and to the birth of the Sealed Knot Society after the Second World War reenactment fighting has been quietly developing. It is a form of mock combat without the focussed seriousness of the martial artist. No spiritual content is envisaged, no peaks of development exist to be attained. It is almost as if we are back in the age of the game. The context becomes more important than the specific activity. Silk and explosions, the clash of steel and the cries of the 'dead' are more important than who is the last man standing or  how many hits one achieved with an 1805 musket.
Now, if one is a reenactor, an interesting conundrum arises. Depending upon the era I am reenacting, what approach should I take? That of a martial artist or of an exercising footsoldier? Or should I be behaving as a 'natural warrior' where it is my instincts and bodily capabilities that get me through? This question has not been explicitly addressed as far as I can see but there has been a rise in the use of the term 'sport fighting'. Reenactment fighting does not necessarily have anything to do with sport fighting but many increasingly think it has, and must.

In addition, sport fighting is context-independant.

Reenactment ? Not.
If I am reenacting being a medieval knight  and at the same time consider myself a sport fighter then I am in essence wasting time and money getting dragged-up when I could dress in cammo and be slamming into my friends with a stick. This is essentially what the SCA have been doing for years. Their response to reenactment is to make their world multi-contextual. It contains many worlds which all have to interact. They interact in the field of combat by having a common sport fighting system which  apes metal weapon fighting but is applicable across their pre-gunpowder based groups. Societies which hold to metal weapons which are at least initially based upon historical prototypes may as well take the same path if they do not hold to reenactment fighting and instead follow the path of sportification. 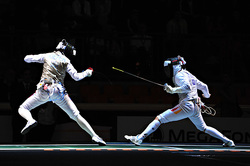 Sportification is the process whereby measurement encroaches into a game and goals and winning become paramount. Once hits are closely defined and rules multiply and develop then sport is on the horizon.
Once sport is established as the raison d'etre for the activity then it will shed the acoutrements and impedimenta which get in the way of  achieving the sport's goals. We see exactly this in the unwillingness to allow certain hit areas for certain weapons or to allow benefit from wearing armour. These things run contrary to reenactment fighting but favour and enhance sportification. 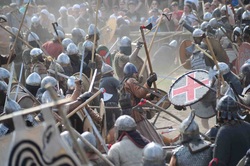 'Eastern' steel-weapon fighting retains a strong ritual component in the way that all hits count and a strong sense of macho outweighs the adoption of many rules. The melee is a proving ground for strength and valour in a way it is not in western steel weapon fighting. But the warriors wear armour (even if it is to much) and   the battle looks like one. Why is it different over here? This is because of the influence of sport and modern martial arts in the west. Why risk damage when it can be outlawed?  Injury is a bad thing so if we all become highly trained we can eliminate it. At the same time we can ensure the most highly trained will be the most successful.

Is this really what is necessary for enjoyable, worthwhile reenactment fighting ?

Only by keeping one eye on the historical prototype can we maintain the original purpose of the activity. What is reenactment fighting if it is in no sense reenacting anything ?
It is a form of 'Live', LARP or a sport. 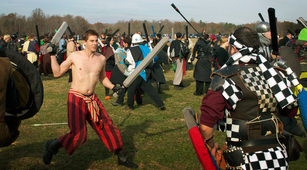 Stop training or practising in modern clothes.
Stop limiting the capabilities of weapons in order to make a more managed fight.
Stop adopting modern military practices and start looking at the ancient ones.
Bring the 're-' back into reenactment or forget the whole thing and start wearing horns on your helmets!