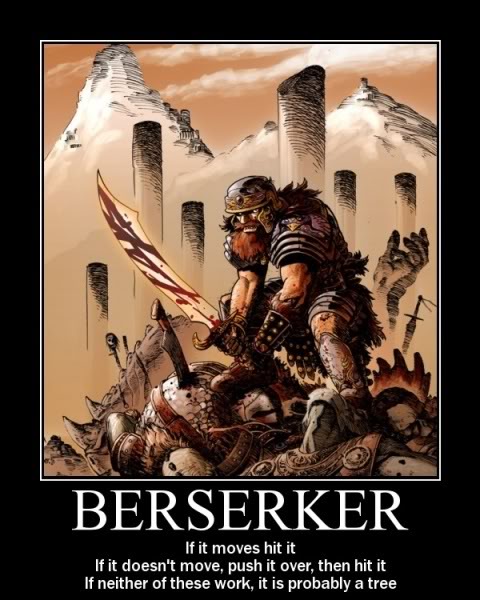 Berserkers are a wonderful aspect of Vikings which, like many other grey aspects, can be ignored or activated at will by those who would interpret Vikings, for whatever reason.


Here is just one piece from a blog on the net. Indicating what kind of ideas are floating about with no visible means of support.

The ravenous self-induced rage before battle commenced enabled the Norsemen to indiscriminately ‘loot, plunder and kill’.  A recent book about the Vikings claimed that some battle chiefs held their berserkers “in reserve” during a battle. The berserkers were only sent into fight if one section began to weaken. An article on berserkers in the Journal of World History by Dr. M. Speidel noted that Norse berserkers were very effective killers, but could not stop killing at will. Apparently, their berserker state was only turned off once all members of the opposition were dead. László Kürti, in a 2004 encyclopedia entry on shamanism claimed that berserker is a regional form of present-day shamanism that utilizes archaic Nordic techniques – particularly the ability to go into a trance-like state.  ﻿FROM﻿

I particularly enjoyed  'utilizes archaic Nordic techniques'. How was it for you ?

Even jollier is the fact that the audience of Sturlusson's sagas did not know what it meant - they had to have it explained. The explanation itself reveals Sturlusson did not know either.

Later sagas - which had nothing to do with  the Viking Age - introduce berserks as a stock character. If you want to be a berserker you should
a) Be Swedish ( at a minimum, NOT an Icelander in any case)
b)Be after the hero's girl
c)Be stupid and churlish
d)Die at the hero's hands

Explanation of something which did not exist gives us more fruitful areas of speculation because we must now imagine how these virtual entities achieved their 'berserk' behaviour.

HOW WAS IT DONE ? (Leading Question)

A series of nineteenth century explanations are  given here. Many stick to these today.

LYCANTHROPY  is a fabulous one, which allows us to entangle 'Ulfhednir' and that term's animalistic overtones with Bears and berserkers. Wait a minute...lycanthropes don't exist. Oh, yeh. Hmmmm I suppose that rules that one out. 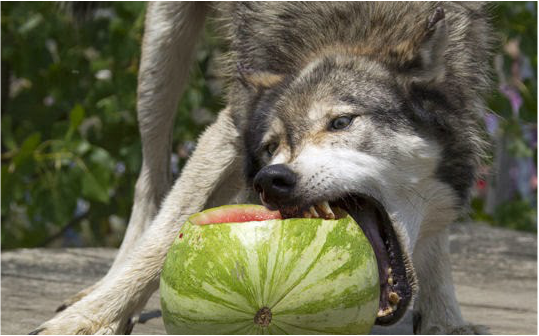 'Fuck context and authenticity , I want watermelon!'
EPILEPSY - accounts of foaming at the mouth (where? - hmmm NOwhere) and biting of the shield a la Lewis Chessmen have been said to indicate a frenzied fit of some kind. Oh yes. epileptics have fits. Maybe these were warriors who had epileptic fits they could direct at the enemy. Hmm. Oh, yes - people having epileptic fits are unconscious and uncontrolable. I suppose that rules out coordinated use of weapons, and legs, even.

Some of these are not Lewis chess men. Oh yes..these chess men date to saga times not the Viking Age !
HALLUCINOGENICS - if it is not a natural sickness then berserks must have used a chemical to creat a supernatural fighting ability, then ? Yippee- The Dead-Heads get their revenge!
We have some wonderful candidates-oops LSD is out with the other synthetics, not even Berserker Apologists go so far as to ascribe advanced chemistry knowledge to Vikings.
No, we must find natural, organic, ecological substances.
Fly Agaric is often bandied about as the best candidate for providing a suitable stimulant.
Amanita muscaria contains the chemicals Muscimol, Ibotenic Acid, Muscazone, and Muscarine.
Plenty for a good party ! The rumours began because Siberian shamen had been observed using it to get into a trance to contact the spirit-world. (drug-world more likely...) Even the urine of the shaman was drunk by co-celebrants to get a high/ spiritual state.
Ecology, organics, mindfulness and recycling all in one mmmmm.
And what were the effects of the Berserk-inducing drug ?
Everything one would expect. Not necessarily compatible with tip-top warriorness, though.
Now, correct me if I am wrong, but I would not choose warriors on the basis of these abilities.
The modern world has its own prism through which to view humanity - that of psychoanalysing everything. Berserkers have not remained untouched.
PTSD - look it up - is basically doing bad stuff because you remember bad stuff you have been through. The horrors of war in the pre-gunpowder era drove some warriors over the edge, apparently and made them  susceptible to rages when they ignored wounds and focussed on their object of hate only.  Other syndromes have been put forward, also related to combat stress. Blind Rage Syndrome or Berserker-Blind rage Syndrome and Intermittent  Explosive Disorder (ooerr) have been suggested as explaining our hairy predecessors behaviour.

Wrongly diagnosed with Berserker-Blind Rage Syndrome ? ﻿﻿Look HERE for help. ﻿﻿
Egil must have dearly longed for such a URL.

The problem with the trick cyclist approach to berserkering is....
1) No lycanthropy equivalent for ulfhednir
2) Lack of applicabilty to a large field full of two armies who will fight.
3) Basis in medieval sagas rather than anything to do with 'Vikings'.

Yes, another case of many complex wonderful solutions to a problem which never really existed in the first place. Q. Why does psychiatryhave a poor public image ? A. Historians

Now then. Let's deal with that arch Viking Apologist Snorri Sturlusson.
Now, Køngesagærne is a big thick book. I love to use it for holding stuff down on the scanner or when gluing flat things, to keep pressure on it. But I do open it for reading and you don't have to plough far before finding a crucial bit re. berserkir and ulfhednir .

'His (Odin's) men rushed forwards without armour, were as mad as dogs or wolves, bit their shields, and were strong as bears or wild oxen, and killed people at a blow, but neither fire nor iron told upon them. This was called Berserkergang.'

Note- Snorri has to explain his terminology. This means that the audience was not familiar with the term 'berserkergang'. In reference to most 'atmospheric' material he does not give explanation - the audience was aux fait with the medieval world and its, to us, oddities. They were not aux fait with berserkers!. Authors seldom include the previous passages which are about Odin's own special powers. We are in the supernatural here. A mythological world not a real one.
Things get a little more complex when we next find berserks and wolfheads, in Harald Hårfagres saga 18. Here, Snorri quotes from what were accesible older works of poetry. In this case Torbjørn Hornklofi in verses called Haraldskvæði - the praise poems about Harald. Now, sit down. Take a deep breath and a sip of tea. Here comes the ancient source of so much berserker-ulfhednir bullshit you would not believe. This is like CGI sitting in a historical drama. Only more effective.

A fleet full of bears and wolves.
Poetry of the Viking Age was not journalistic eyewitnessa accounts. It was created to sing the praises of a king or noble. The genre required complex rythm and rhyming patterns. It also required a keen sense of language to appreciate word-plays within the text. One type of word-play was to name something indirectly by using a synonym or allegorical reference which would allow an 'insider' to know what was meant but ignorant audiences to remain nonplussed. This is why Snorre gives his early explanations of 'berserk'. Snorre and his audience live 200 plus years after Hornklofi rhymed, wrote or otherwise created his work.

Berserk as a word is not understood today by scholars. Its derivation, its etymology. Neither is ulfhednir - but we can more easily see what ulfhednir meant because it literally means 'wolf-skin dressed' or similar. Two terms which seem to relate to totemic and savage animals. Ideal for warriors one would think. But Hornklofi does not tell us directly. There are allusions here that are opaque to us today. Despite lots of ink describing totemic secret societies and identity problems of ancient youths and their bonding rituals...we do not know.

We have Snorre's gloss. That is all. Thanks old bean. Just toss in a few lines to light the touchpaper of fantasy and walk away to be murdered in your bath...

Snorri as Kristian Krohg or v.v. ?
Totemic figures  with wolf's heads occur much earlier in archaeology a long way from Iceland. A possible felt mask from Haithabu has also been brought into play as a berserker/ulfhednir thingy. The 'Gothic' dance of the Varangians at the Roman court in the tenth century is recorded as having included masks and animal skins. Maybe a trace here ?

But remember . We are dealing with a poem. It is a highly-developed literary artefact which is not meant to be a factual account. The image it projects is paramount. It is crazy to look for real parallels. Unfortunately.

Berserkir and ulfhednir are the fine poetical names for bands of very unfine warriors who were around c.900AD. These warriors were not special. They did not necessarily call themselves wolves or bears or dream of these animals when in a trance.  A poet praised their leader by likening his forces to those beasts. That is all.
Cue several hundred years of discussion and what if and outright fantasy....