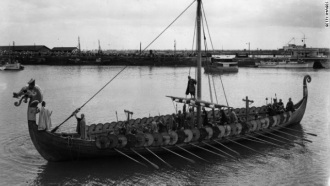 'The Viking' : a replica of the Gokstad ship, which crossd the Atlantic in 1893.
The use of ships as a means of conducting warfare has been claimed to be a revolutionary aspect of viking warfare key to their success.

There was nothing revolutionary about the viking's use of ships or of the ships themselves.
During the course of the Viking Period ship design did change but nothing except a willingness to sail set the Scandinavian's capabilities above those of their neighbours.

The galleys of the Viking Period were not well suited for combat at sea and they were primarily a means of transport which allowed access to the highways of the ancient world - seas and rivers.

Viking ships are a great example of  basic technology developed through use to achieve an effective practical solution to the needs of the time. When times and needs changed these ships were outmoded and no longer so effective or useful.