THE MYSTERY OF LEATHER ARMOUR

It is a mystery why we have no evidence of any leather armour from antiquity - barring some cavalry thigh defences from Roman times. This mystery needs some work but probably has a rational explanation. Such as,  there never was any.

It is also a mystery as to why reenactors insist on producing and wearing a wide range of leather armours without any historical prototypes within the period of interest.

We have no evidence for horn and bone armour from Viking times but it was possible to make it then. Why do people not make it for reenactment? Why not wooden armour ? Something is amiss here. 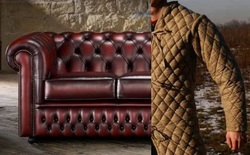 Thigh defences for a cataphract cavalryman. NOT Viking.
There is NO evidence for leather armour in the Viking Age or historical periods immediately before or after.

There is ONE find of thigh defences for cavalry made of laced rawhide lamellae from the Roman finds at Dura Europos dating to the third century AD.

There is ONE reference in a medieval saga to magical armour of reindeer hide.
From St Olaf's saga. Anyone who would like to use this reference must do some interpretative gymnastics to explain how the effectiveness of this armour is actually attributed to magic spells cast by a Saami shaman on the garments but it really refers to actual leather armour?  Suddenly the shine comes off this leather armour. Reindeer, Saami, magic. Not Viking. Not historical.

There are numerous groundless illustrations in popular books.
Osprey's colourful plates are, as often, the source of mythical evidence. 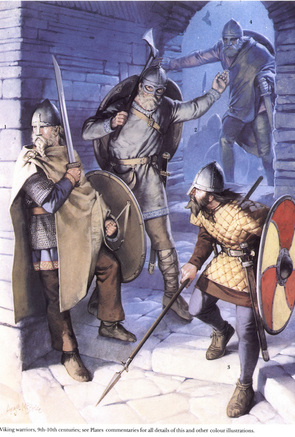 See video below where 6mm plates of cuir bouilli are penetrated by longbows. No man could wear armour made of leather this thick. Leather armour less tough would be easily defeated.
Leather armour is stiff and extremely hot to wear. It does not absorb sweat. It does not breathe. In the summer campaigning season it would be insufferable to wear for any length of time. Mail is more flexible, ventilates and allows sweat to evaporate.

Leather armour would be expensive if it was made of good quality materials and was to have the appearance desired by a man of the military class.

There is NO evidence for leather armour in the Viking Age and it is unlikely it was ever used.