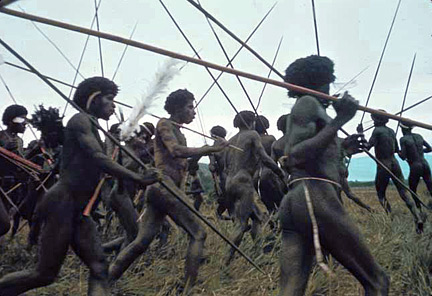 A QUESTION OF LENGTH
If  there is debate about whether  or not to use authentic spears, as opposed to some modern-day thing we decide is good for our modern-day purposes, we must try to find out how long the spears used in the Viking Age were.

DIGGING THE DIRT
﻿﻿There is a wealth of information from archaeology. I will not go through it all in a laborious way but tabulate it for easy digestion. HERE

GRAPHIC AND EPIGRAPHIC EVIDENCE
Spears in art. How the people of the time saw themselves, or rather, saw their spears. HERE

ANALOGY FROM ETHNOGRAPHY
What have tribal peoples used within recorded history? HERE

ANCIENT AND MEDIEVAL  ANALOGY
What did other ancient peoples use in war ? HERE

Now you have had the chance to review a lot of evidence what is your conclusion ?

One may conclude that the case is not made to your satisfaction.
No one can force another to believe. One can, however, conclude that someone who refuses to believe overwhelming evidence is perverse or willfully ignorant.

One may conclude that it has not been proved that cocktail stick spears were NOT used.
It is possible to prove a negative. This is when the insistence on holding a view in the face of a wealth of evidence to the contrary is, on generally accepted standards, irrational or perverse.

Why should one give a toss ?

For the hours reenactors use hand-sewing and decorating their clothes, accumulating or making gear to camp, work, even live as people did in the Viking Age.

For the many, many years of research which has determined how iron was produced  in the Viking Age and how  pattern-welded blades were made, how Viking ships were made and sailed, how they made cloth , how they bult houses, what they ate. Etc.

For the thousands and thousands of people who participate in a pastime under the impression that they should try to recreate the physical culture of  our ancestors in a fascinating era of our common history. That recreation being factually based. On other weekends they, or their less obsessive friends, can dress as Orcs, pixies or Klingons as they see fit.

To give meaning. It is not  possible to truly recreate the Viking Age. It is an ongoing project with a goal that shifts constantly. The pursuit of that goal is what enthuses the pastime and ensures it is constantly rejuvenated and changing.
To baldly state an issue is decided on the basis of contemporary factors
misses the point of what reenactment is.