There is a lot of ink splashed around describing more or less complex formations that could b e adopted by Dark Age armies. After reading all possible ancient texts I find that these accounts are wishful thinking based upon medieval fantasy or are lazy repetition of modern authors doing the same. Two modern sources  are most to blame, Paddy Griffith's  'Viking Warfare'(1995) and Osprey's  on 'Viking Hersir'(Warrior 3) and 'The Vikings'(Elite 3).

Griffith's book lists Saxo as a source but does not discuss obvious episodes where the behaviour of Viking armies is discussed. He also cites vicariously, meaning he took other authors' excerpts instead of directly citing Saxo himself. I doubt he ever read Saxo at all.

Viking Hersir - by Mark Harrison(1993) , and The Vikings(1985) - by Ian Heath both seem to echo the brief summary given many years before by Foote and Wilson(1970). Neither gives Saxo as a source but Heath does, at least, mention Flateyarbok.

Add to these erroneous accounts the kind of tosh made at great expense for the TV and one can see that the casual reader is easily led into the idea of Viking Armies competing with the Trooping of the Colour to adopt outlandish formations. Authors such as Kim Siddorn and Martina Sprague uncritically perpetuate the myth. Even the latest offerings in this genre, 'Vikinger i Krig' by Hjardar and Vike(2011) and 'Viking Warfare'(2012)  by I.P. Stephenson regurgitate this error. Reenactors perpetuate the myth because it looks 'cool'.

But modern authors and reenactors are not alone in their penchant for anachronism. If we look at secondary medieval sources for the Viking Age they positively adopted it as a means of adding credibility and authenticity to their accounts. We must remember that medieval authors were not scholars of history seeking kernels of truth from original sources. They were creators of the truth by virtue of compiling textual corroboration into works of literary art.
The' Skjaldborg' (O.N.Shield Fort)
This term is used in medieval sagas as a poetic view of what is probably intneded to be a simple shieldwall. This was reinterpreted by Paddy Griffiths as a kind of 'testudo' used to protect a leader - presumably while he took five and gathered his wits for the next phase of the battle.
It takes maybe five seconds to see the stupidity of such a 'formation'. It is a gift for the enmy to run up and squash all hiding under the shields or to simply surround and massacre them.

If there is any doubt in your mind as to how much influence the uncritical reliance on secondary source material can have in the general view of a subject take a look at these pictures.
Gerry Embleton's Wall of Death
The gifted illustrator Gerry Embleton created a powerful image in Plate D of Osprey Warrior 3- Viking Hersir. Reproduced below.
The caption is as follows...
'This reconstruction of a training session at Jomsberg shows the skjaldborg(sic) (shield-wall) arranged in a mutually supporting double line. .......
A senior Jomsviking has chosen this moment to test the strength of the skjaldborg(sic) by attempting to kick on eof the trainees out of position.'

Despite the fact the piece refers to a 'reconstruction' of a scene from a medieval fantasy saga (as was definitvely determined in the 1960s) this image is brought to life today as part of some 'historical' reenactment shows. Without any basis in history. One could just as well ride a motor-cycle over the shields to give a nice display.

There is no Norse source which suggests that a shield wall was ever worked with more than one layer of shields. We have no direct written evidence but several graphic examples such as the 'Warrior Stone' from Gosforth in Cumbria at the top of this page. We do have written evidence from later Roman military manuals for a formation known as the 'phulcum' /fylkon designed to counter missiles (Strategikon XII.B.16.30-38). In such a formation the first rank knelt behind their shields, the second stood close behind and guarded the heads of the first and their own torso and head. The third and subsequent ranks kept their shields high to protect the head and shoulders like a roof. This is actually a close-packed derivation from the usual shield wall. It has nothing to do with 'Viking warfare'.

In his account of the Battle of Stamford Bridge, 1066, as given in Harald's Saga, Snorri Sturlusson relates  that the 'Viking' army of Harald Hardrada took up a special formation. The army stood as a shield wall but with its wings curved back round so that they met at the back - effectively a ring. The king and his retinue stood in the centre with archers and reserves.

The ring so formed is described as of even depth and with 'shields overlapping  in front and above'.

In addition, Harald makes special provision that he can send out sorties against the English cavalry that he knows will attack in small detachments. Infantry making sorties against cavalry ?

This is a mostly convincing and detailed account. The only problem is that this is precisely what Snorri is good at. Snorri's account of Stamford Bridge begins to crumble when we read that the English attacked as cavalry. Furthermore it begins to read like a mirror image of his account of Hastings, with the Norwegians playing the role of the English.

We cannot escape the fact that Snorri was a saga writer composing a good story about events more than 200 years earlier. No other texts support his account and noneof those we know he used as his sources. 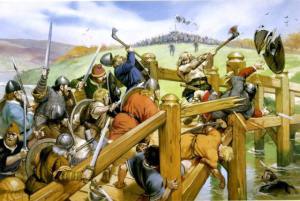 Snorri's Ring stands in the background as the hero axe-wielder makes his stand. Stripped to the waist because it is hot work.