'anywhere over the world's breadth
men will attest me a trusty garment.'
Exeter Book: Riddle 35

Mail is the English word, derived from the French 'maglia' via the Latin 'macula' which means 'net'. Looking at the stuff it is obvious why it should be called a net.
There is currently a pretentious tendency to try and adopt a falsely anachronistic use of a medieval spelling, 'maille' which is unnecessary. The creators of the would-be modern knights/musketeers do like their jargon.

Despite the essentially simple manufacture and structure of mail there is a wealth of confusion about what it is. Take a look - or rather, don't - at TV Vikings and you will see a wide range of plaited leather and rivets combined with abbatoir-workers gear and kevlar masquerading as armour.

See below how far TV and film armour  has come in 45 years. 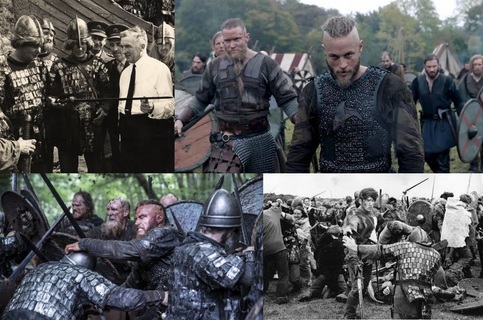 The colour stills are from HBO Vikings 2014. The monochrome from 'Alfred the Great ' 1969.
Fifty years has not advanced the ideas about armour form the period beyond, or even up to, what was known in 1969. Unfortunately, authors who could easily know better still produce material which easily leads readers astray.(e.g. HERE)﻿﻿﻿﻿
A useful summary of the cloud of confusion is provided HERE.

The main point to remember is that mail is made of iron rings rivetted together and is not available in a variety of structures or types. Mail is mail.
Viking Age Mail
We have a very limited range of evidence for mail in the Viking Age.
The circumstantial evidence is high that the warrior class would have owned and used mail. Poems from the Norse and parallels with the societies they were in contact with, point to the existence of mail.

The mail we have from finds is either alternate rows of flat, square section punched rings and round rivetted rings, or all-rivetted round-wire construction. There is a tendency to all-rivetted construction into the middle-ages.

The usual garment is a shirt with sleeves to the elbow or longer and a length down to the thigh or knee. We have no evidence for small pieces applied to leather or individual protections for arms or legs or crotch. The garment was taken off over the head and had no 'seams' or side openings an dno attached 'mittens' of mail.

The mail shirt could be blackened or blued to protect against rust or it could be maintained brightly polished. 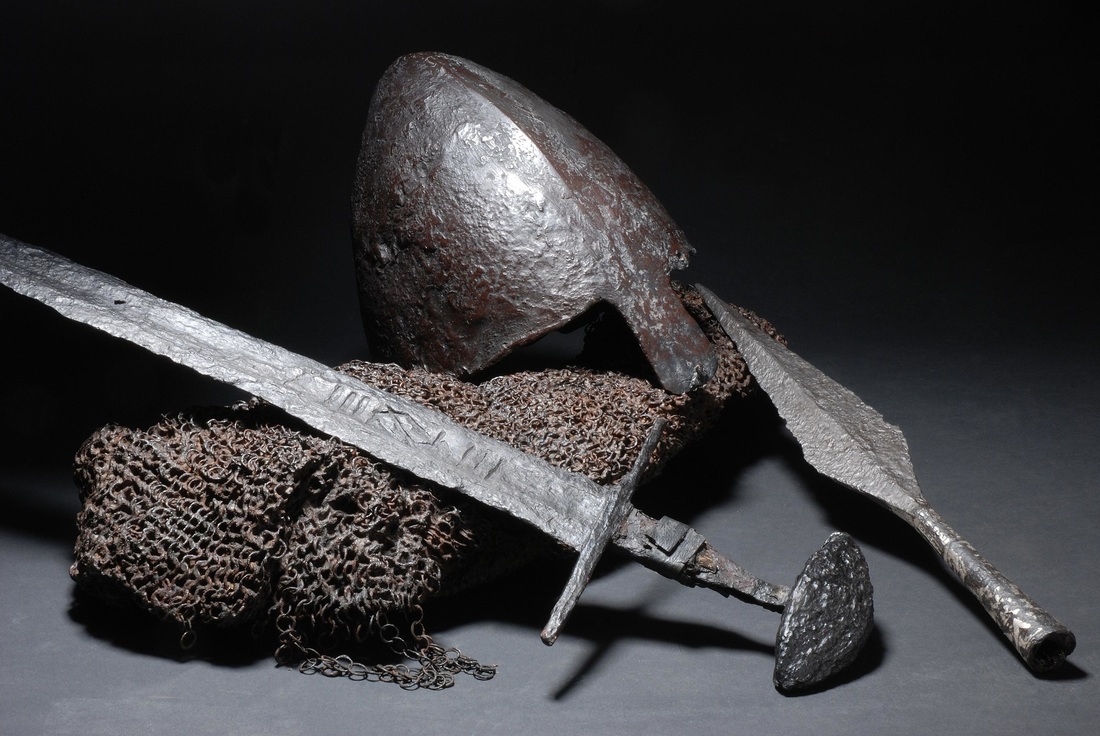 Beautiful finds from Ostrow Lednice Lake, Poland. Maybe from c.1038AD.
In summary. Mail armour of the Viking Age was made as a shirt which was put on and off over the head. It was not combined with leather or plates. It was an effective, flexible, durable protection. Most men who were members of the fighting class would probably have had one, and this was even more likely in the 'Second' Viking Age of warring kings.