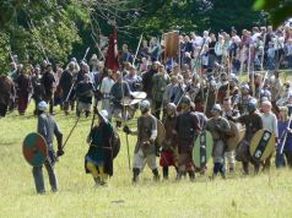 Large conglomerations of warbands : such as the Great Heathen Army which overwintered at Repton in 873-4AD  and could take on the army of an entire kingdom.

Scandinavians of 750-1250 no longer lived in a purely 'heroic' society. The evidence of the 'Bog Armies' shows us that kingdoms or tribes conducted warfare at a level where they could send hundreds of similarly-armed and organised men across the sea to pursue their interests already in the third century AD. This shows us that the idea of disciplined combat in groups had superceeded that of individual warriors competing against each other to daunt and defeat the enemy.